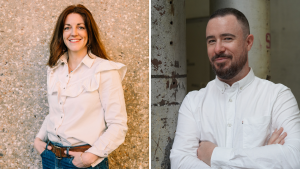 Dublin, May 5th, 2022: The Gate Theatre is delighted to announce the appointment of a new Artistic Director, Róisín McBrinn, and a new Executive Director, Colm O’Callaghan.

Róisín and Colm will also hold the positions of co-Chief Executives of The Gate, jointly reporting to the Board. Róisín and Colm’s contracts are for five years, and they will take up their new positions in mid-August and late July respectively, looking after a Gate presentation for the Dublin Theatre Festival, and launching their programme with the subsequent Christmas show.

“On behalf of the Board of the Gate, I am thrilled that Róisín and Colm have agreed to join the Gate and will jointly lead the next chapter of its development,” said Gate Theatre Chairman Peter Crowley. “We are fortunate to have secured the services of two enormously talented and visionary theatre professionals, as we move closer towards the one hundredth anniversary of the Gate’s establishment,” Mr Crowley added.

“It is a huge honour to be The Gate’s new Artistic Director and I look forward to working closely with Colm, the existing team and the wider Irish artistic community to produce exhilarating experiences for our audiences at home and abroad,” said Róisín McBrinn. “Huge thanks to Gate Director Selina Cartmell for the great work she has done in developing audiences, investing in women directors, and forging an exciting future for The Gate,” she added.

“For almost 100 years, The Gate has played a defining role in Irish society as a vital cultural institution,” said Colm O’Callaghan. “I am so excited to return to my original theatre home of Ireland and it will be a privilege to work alongside Róisín at The Gate in contributing to this legacy. I look forward to working with my new colleagues as we build towards the significant milestone of its centenary year in 2028.”

Outgoing Gate Theatre Director Selina Cartmell congratulated Róisín and Colm on their appointments and wished them well in their new roles. “The Gate has found a great new team to take this world-class theatre on the next stage of its journey. Despite the impact of Covid on the arts sector and other unprecedented challenges, the Gate team has built a programme that has re-engaged audiences with the best of Irish and international talent, and I am confident that under their stewardship, it will continue to be a beacon for social and cultural change.”

Theatre Director Róisín McBrinn has been with Clean Break Theatre in London for more than seven years, the past four of which as Joint Artistic Director and Chief Executive. Clean Break, which was founded 40 years ago by two women in prison, presents ground-breaking plays on the complex theme of women and crime. Prior to joining Clean Break in 2014, Róisín spent two years as Associate Director of the Sherman Theatre, in Cardiff.

Róisín’s work as a director includes The Gate’s production of The Snapper by Roddy Doyle, and most recently Typical Girls by Morgan Lloyd Malcolm, a Clean Break and Sheffield Theatres co-production. Having trained at the Donmar Warehouse and under the mentorship of Kathy Burke, over the past 20 years she has directed for Abbey Theatre, The Donmar Warehouse, The Bush Theatre, Leeds Playhouse, Georgia’s Rustaveli Theatre, Chichester Festival and Soho Theatre.

Colm O’Callaghan has been the Executive Director of Force Majeure, which is one of Australia’s most celebrated dance theatre companies since January 2016. Colm significantly improved Force Majeure’s financial position through increased funding and partnerships that allowed it to present a significant output of productions over the past six years.

As co-CEOs, Róisín and Colm will take over from outgoing Gate Director Selina Cartmell. Selina’s five-year contract came to an end last autumn, however she agreed to remain in situ until this July and has programmed the theatre up to and including The Steward of Christendom, opening July 20th, to assist the Board and the theatre with the transition to a new team.

“Selina did an amazing job, and we can’t thank her enough,” Mr Crowley said. “During her tenure, The Gate presented 11 world premieres, including seven Irish premieres of contemporary writing. Alongside the Gate’s significant critical and commercial success with production of The Great Gatsby, A Christmas Carol, The Snapper, Hamlet (transferring to New York) and Endgame, Selina has also made huge strides forward in terms of gender balance, and diversity and reaching new audiences. We look forward to Róisín and Colm building on the legacy of Selina’s very significant achievements.”

The Gate Theatre acknowledges the continuing support of its principal funder The Arts Council and is grateful for its significant investment through this next exciting chapter.

About The Gate Theatre

The Gate Theatre, which has been in operation since 1928, is one of Ireland’s largest producing theatres and plays a critical role in the Irish cultural landscape.

The Gate was founded in 1928 by Hilton Edwards and Micheál MacLiammóir and is a vital cultural institution for Dublin and for Ireland. Their vision, to offer Dublin audiences an introduction to the world of European and American theatre, as well as classics from the modern and Irish repertoire, remains true today.

The Gate Theatre is an internationally renowned artist-led organisation producing original work of world-class excellence which inspires, challenges, and entertains its audiences. It develops and supports emerging and established artists with ambition, talent, and skill to produce new work, alongside reinvigorating existing work from the Irish and international canon. The ethos and vision of the Gate demands that it fulfils its social and cultural purpose as an international home for Irish artists and an Irish home for international artists, creating a ‘world theatre’ that leads cultural conversation for artists and audiences in a progressive and inclusive dialogue.

Prior to the Covid pandemic, the Gate employed more than 500 freelances directly and indirectly, of which over 170 were artists – writers, directors, designers, composers, musicians, and choreographers etc. Equality and diversity are at the core of the Gate’s cultural values, and it seeks and delivers best-in-class policies, shaping and leading new ways of thinking.

The Gate Theatre is proudly supported by the Arts Council.