Marc is a Brooklyn and Dublin-based director from Ireland, the UK, and Catalonia. He directed Beginning by David Eldridge in 2019, and has associate directed The Great Gatsby (2017) and A Christmas Carol (2019) and is a recipient of the Gate Theatre Bursary 2020.

My mother grew up under a fascist dictatorship where gathering was often banned. For her, coming together with others at a theatre was a political act: something epic was at stake for the performers, and audience alike. She taught me that the theatre is a place where we can come together to think through radical ideas about who we are, what we feel and how we choose to organise ourselves as a society.

Right now, we can no longer be together and the world feels like it’s coming apart at the seams. I profoundly miss those precious nights where, surrounded by strangers, we feel our collective understanding shift as we encounter a story which, through laughter or tears, asks us how we choose to get along. 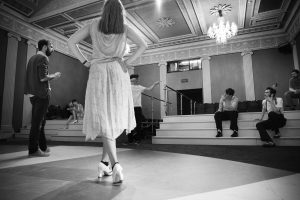 For me and other theatre artists, it feels like our industry has been put into a coma. Cancelled productions means lost livelihood, but also visions that we had dreamt up to share with audiences turning into dust overnight. None of us work in the theatre to be behind screens – if anything, our mission has always been to make the world less socially distant. So, this moment, though absolutely necessary, is perhaps the most painful time our industry has ever encountered. The one upside of a moment like this, is that it’s allowed us to stop and take time to lay seeds for future projects and tend to ideas that were bubbling but got lost to the general rush of just making theatre happen. So, personally, I’ve been spending this time reading, reflecting and taking inspiration from other artists and art forms. So that, when the time comes, I’m full of ideas for what our re-invented theatre might look like. 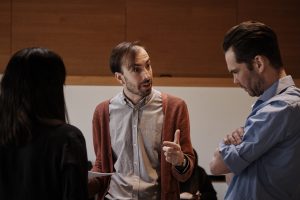 This kind of slow work is impossible for artists without the support of institutions. This is why residencies and bursaries are so vital right now – let’s make no bones about it, artists already live in a constant state of precarity and, without significant support, many great artists are going to be forced out of the industry. This will be a body-blow – young minds full of potential won’t be given first opportunities, artists with families will be wondering whether their life’s work is sustainable, and the class and racial diversity we should be striving for on and off our stages will be put in peril.

I’m so grateful that, in these times, The Gate has committed itself to supporting artists. Although the doors are closed for now, the work that they are supporting will mean there is something to come back to. As a teenager growing up in Limerick, The Gate loomed large. I remember the excitement of being bussed up to see a production there, and feeling the spark of that unique space which can feel epic and intimate all at once. The Gate was founded out of an abiding passion for the art of theatre and a strong belief in the fierce independence of artists at the forefront of what a theatre does.

The Gate’s reinvention over the last years has been centered around that same conviction in artistry, and I owe a great deal to their commitment to me – from working as an associate director, to directing my own work and, now, supporting my time in residency on an artist’s bursary. This has bought me time to read the stack of plays that the bustle of freelance directing had kept me from, expand my horizons in terms of the kind of work I want to make, meet with new collaborators, and plot out new ideas. 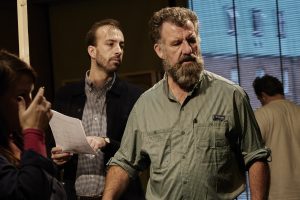 One of these has turned into the next project I will develop – a radical reinterpretation of Maxim Gorky’s Children of the Sun. Written from a jail cell on the eve of a revolution, while Russia was fighting a severe cholera epidemic, it’s a dark comedy about revolt, progress, inequality; a play about people certain of their ideas in uncertain times, and the moment when those certainties must yield to the reality of a tomorrow that is almost today. Amidst all the darkness of the past months, it’s been a joy to get to focus on this and other seeds for new projects – The Gate and their support has given me the gift of time to slow down and pay attention.

This is the work for now. We can’t be in front of audiences and, often, we can’t even be in the same room as our collaborators. But soon, hopefully sooner than we think, we’ll be back. And imagine that first night, in a packed auditorium, that gorgeous hush that descends as the lights go down and we settle in for an experience together. It’s going to be electric…